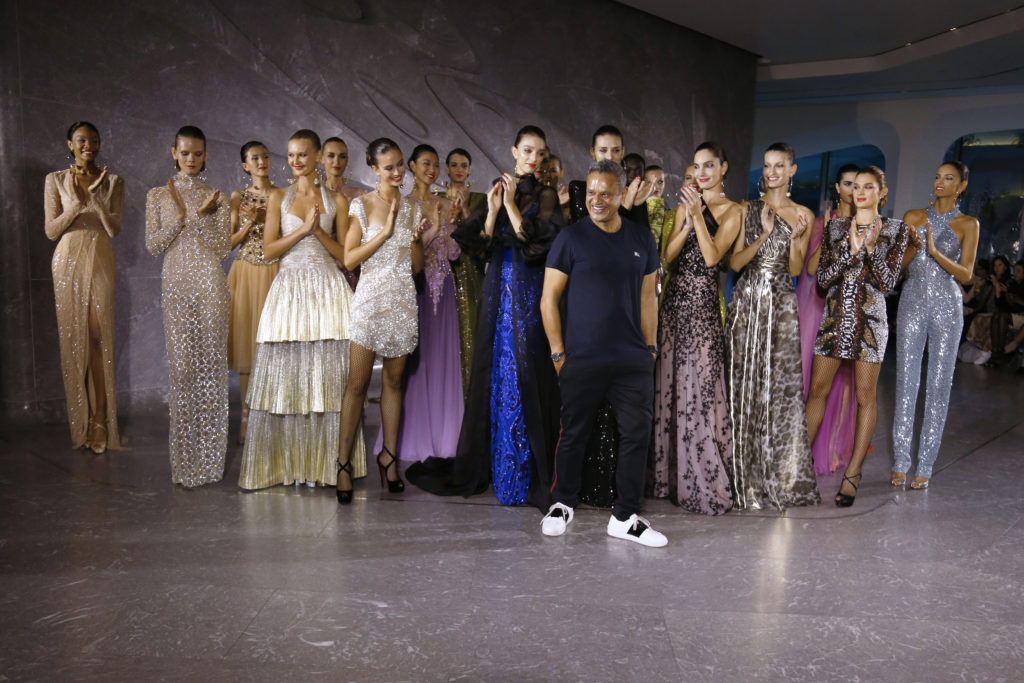 NEW YORK — To showcase his spring 2020 collection at New York Fashion Week, Naeem Khan decided to stage a runway show in the lobby of a luxury condominium building designed by the starchitect Zaha Hadid.

The futuristic building, with wrap-around glass windows facing the trendy High Line, was one of the last structures that Hadid designed before her death in 2016 and it has been home to such celebrity residents as Sting and Trudie Styler as well as Ariana Grande and Pete Davidson during their short-lived relationship.

Khan also lives there and was a close friend of the prize-winning architect, so he decided to dedicate his collection as a “tribute to Zaha” in a salon-like atmosphere that harkened back to the days when fashion shows were intimate affairs.

Models clad in his latest designs roamed through a courtyard atrium garden and the granite-walled lobby as Khan’s celebrity pals, including Ryan Seacrest, reality star Kaitlynn Carter (who has been romantically linked to Miley Cyrus), and Miss Universe Catriona Gray, looked on from the front row.

Like the plush surroundings, Khan’s collection featured geometric architectural shapes with lots of glitter and flash. He worked alongside Halston in the late ’70s and the legendary designer’s influence continues to permeate his work, with bedazzled mini-dresses, sequin halter jumpsuits, glam gowns with padded shoulders, and hooded tunics in the collection.

Colorful floral caftans and drawstring jackets, pants, and one-shoulder gowns in bold animal prints are also prominently displayed — after all, it seems animal prints never go out of style — and traces of Khan’s Indian heritage are evident in a floor-length coat with intricate embroidery design and a moss green stitched caftan.

Among the most striking pieces in the collection are a series of gowns in vibrant jewel tones. A one-shoulder satin gown in a bright fuchsia and a V-neck chiffon gown with cape detail in ombre shades from turquoise to green are particular standouts and promise to show up on the red carpet in the near future.